Students were given a brief introduction to the endangered SE Red-tailed Black-Cockatoo, its food and nest trees, the main threats to its survival and what actions volunteers, farmers and organisations can take to help reduce the rate of decline.

Furthermore, students also learned the basics of seed collection, including how and what type of seed to collect and the importance of collecting seed locally (collecting seed that is endemic to the local area where the revegetation will take place).

The level of interest and engagement shown by the students throughout the discussion was extremely pleasing, with many students keen to share their existing knowledge, stories and sightings of the cockatoo.

The second part of the exercise involved the students collecting the fruit or seed capsules from branches of brown stringybark, collected from Cobboboonee Forest Park the previous day, and placing these into brown paper bags. Students labelled their bags with their name, date collected, species name (Brown Stringybark - Eucalyptus baxteri), and the area where the seed was collected. These were then hung near the window to encourage the fruit capsules to open and the seed to fall out. 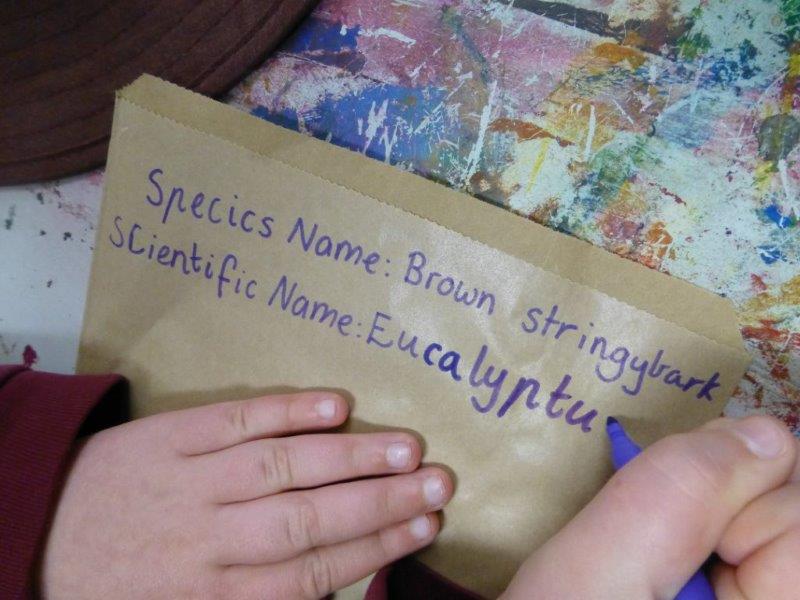 Seed collected from the fruit will then be grown by the students in the school’s nursery and later planted out around the boundary of the school grounds. In doing this, the students will be creating a future food resource for the cockatoo.

During an earlier visit to the school, students were given some stringybark seed collected from Lucindale to germinate as a small class exercise with their Art and Garden Teacher Mel Holtz. From this seed several hundred stringybark seedlings have been grown, many of which have been pricked out and re-planted into forestry tubes ready for planting next year.

The school has very kindly given us all seedlings grown for revegetation on landholders’ properties near Lucindale, as part of the highly successful ‘Cockies helping Cockies’ Desert Stringybark Restoration Project.

On behalf of the Red-tail Recovery Team, BirdLife Australia and Zoo’s SA Desert Stringybark Habitat Restoration Coordinator Kerry Gilkes, I’d like to express my sincere thanks to Portland North Primary School, and in particular Mel Holtz and all the students involved, for donating the seedlings. These will be planted out next year.

For more information on how your school can become involved please contact Bronwyn Perryman on 1800 262 062 or email redtail@birdlife.org.au.