More than 130 volunteers participated on Saturday 4 May as part of the 2013 Annual Count for the endangered South-eastern Red-tailed Black-Cockatoo. 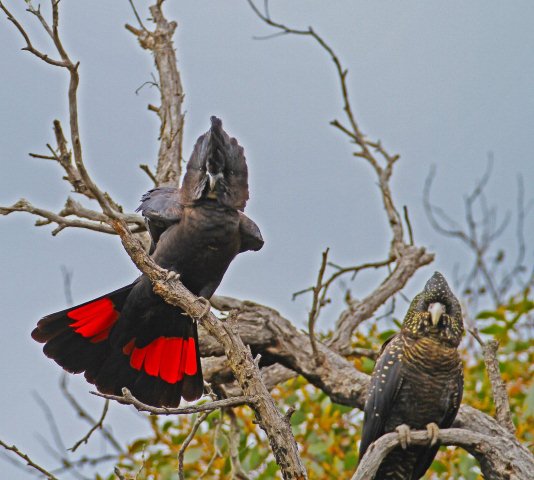 
Covering more than 2500 kms of stringybark forest and spending around 236 hours searching, this year our wonderful team of volunteers counted 1118 birds (excluding double counts) in stringybark forest across the species range in South East of SA and South West Victoria.

Despite a good number of reports in the lead up to the count, the final tally was down by 350 birds on last year’s record-breaking tally.

“It’s unlikely that the population has suffered a severe decline over the last year,” explained Project Coordinator Bronwyn Perryman, “but rather just that birds were just missed on the day”. Red-tails are highly nomadic birds, roaming from Natimuk to Nelson in south-western Victoria and from Mount Gambier to Keith in the South East of South Australia.

“Finding them can be quite a challenge, especially if they are not calling or are feeding in stringybark forest on private land that is inaccessible to counters,” said Bronwyn.

This year, large flocks were recorded near Edenhope, Casterton, Benayeo, Natimuk and Naracoorte. There were a large number of birds in the Edenhope area, with a flock of 277 found in Yallakar State Forest by locals Gloria Freeman and Geraldine Ryan. Both women have had a long interest in the birds and participating in the Annual Count, with Gloria having taken part in every count since they began more than 18 years ago.

“We care so much about Red-tails, and enjoy participating in the count and educating kids about the importance of conserving these birds for future generations to come,” said Gloria.

Most of the birds were found feeding in Desert Stringybark forest, which typically occurs in and around Casterton, Edenhope and Naracoorte. Interestingly, few birds were recorded south of Strathdownie, with none found in the Lower Glenelg National Park. Low numbers of birds have been recorded in this area since 2010. This is thought to be due to the fruiting patterns of the Brown Stringybark, and more recently, as the result of large wildfires which have scorched more than 7000 ha of stringybark habitat in the Kentbruck area alone.

“The annual count not only provides us with the minimum number of birds, but also helps us determine patterns of habitat use and, more importantly, the location of large flocks,” said Bronwyn. “Over the next few weeks, this information will help us undertake our annual flock counts, which provide us with an indication of last year’s breeding success, and an overall snapshot of how the population is faring.” Results will be in the next edition of Red-tail News. You can be placed on the mailing list by contacting Bronwyn Perryman at redtail@birdlife.org.au.

Importantly, the annual count provides a great opportunity for the community to become involved in the recovery program and learn about the conservation of this endangered bird.

"We again had a good turnout of volunteers, ranging from locals, including farmers who chose to search their own properties on the day, to those who have travelled from afar, including Adelaide and Melbourne" said Bronwyn. Furthermore, many volunteers who participated on the day have continued to return year after year to help search for cockatoos.

This year 20 people attended the annual Bailey’s Rock BBQ and Campout. "As usual there was much good-hearted banter about who counted the most cockies, with Geraldine and Gloria claiming victory this year with their huge flock of 277 birds. They were closely followed by Richard Hill, Dick Cooper, Kay & Noel Stratman and myself (lucky enough), who teamed up to count 233 birds coming to drink near Casterton" explained Bronwyn.

"On behalf of BirdLife Australia and the Red-tail Recovery Team I would like to express many thanks to all our wonderful volunteers who have helped out yet again to make this event so successful, including those who were called upon at the last minute. Without your incredible effort, this event would not be possible – so a big thanks to all".

A map of the count results will be be available soon through on the annual counts page.