The charismatic Red-tailed Black-Cockatoo is the first of five species of Australian Birds to feature in a new series of commemorative coins produced by The Perth Mint. 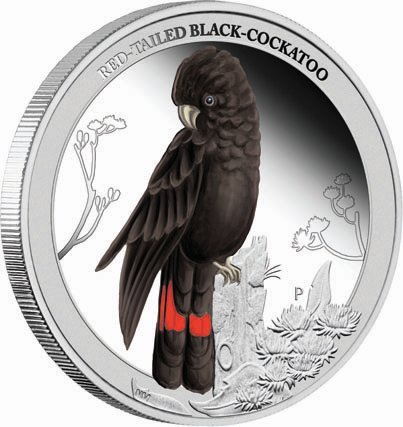 With its vividly coloured tail feathers, prodigious size and charismatic nature, the Red-tailed Black-Cockatoo has long captured people’s imagination. Long before the arrival of Europeans, this cockatoo was a totemic species for many Indigenous Australians across the continent, and today they are still regarded as an ‘iconic’ species by many people of both Indigenous and non-Indigenous backgrounds.

First formally described after being collected at the Endeavour River in North Queensland during Captain Cook’s first Pacific voyage of discovery, the species is the most widespread of the black-cockatoos, occurring across many regions of Australia’s mainland, where there are five different subspecies.

In some areas the species is readily seen and may even seem rather common, but in other parts of Australia the numbers of these black-cockatoos have declined to disturbingly low levels. For example, the subspecies that straddles the border between south-western Victoria and south-eastern South Australia is currently regarded as Endangered, while the birds that occur in the South West of Western Australia are considered Vulnerable.

Recognising the charm of the species, The Perth Mint has produced an impressive commemorative ½ ounce silver proof coin which features a beautiful image of a male Red-tailed Black-Cockatoo surrounded by sprays of native flora. The image highlights the bird’s vivid blood-red tail feathers contrasting with its otherwise sooty plumage.

An extremely limited number of these 99.9% pure silver coins have been produced (just 10,000 were minted), with each housed in a customised presentation box with a certificate of authenticity. They are sure to be popular with coin collectors and bird lovers alike. The cost is $67.50. Other species due to be featured in future releases in this series include the Budgerigar, Regent Bowerbird, Rainbow Lorikeet and Superb Fairy-wren.

What a great way to spread the word about the plight of these charismatic Australians.

To find out more about this coin and/or how to purchase other coins in the ‘Birds of Australia’ series, visit The Perth Mint’s website by clicking here or call Tollfree 1300 663 991.