The South-eastern Red-tailed Black-Cockatoo (SeRtBC) National Recovery Plan (2007-12) is currently due for revision. Over the last few months Tim Burnard and Rachel Pritchard from the SeRtBC Recovery Team have been working frantically to develop and prepare the new Draft Recovery Plan (2012-17) for the species, which is now available for comment from all interested parties and stakeholders. Please read on to find out how you can provide comment. 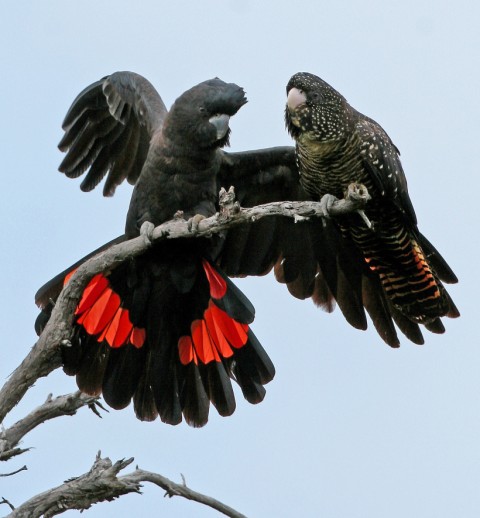 The new Draft Recovery Plan outlines the long-term strategy, and short-term objectives, for the recovery of the South-eastern Red-tailed Black-Cockatoo (Calyptorhynchus banksii graptogyne). This plan is the fourth recovery plan for the species, and provides recovery objectives and actions for a five-year period, commencing in 2012/13.

The South-eastern Red-tailed Black-Cockatoo is listed as ‘Endangered’ under the Commonwealth Environment Protection and Biodiversity Conservation Act 1999 (EPBC Act), and is also listed as threatened in the two states in which it occurs (South Australia and Victoria).

The South-eastern Red-tailed Black-Cockatoo is found in the south east of South Australia and far south west Victoria. The single population of between 1500-1800 individuals is believed to be continuing to decline in response to declining habitat.  The cockatoo relies on the seeds of only three tree species for food, and food shortages are believed to be limiting recovery. Approximately half of the historic feeding habitat has been cleared for agriculture, with limited natural recruitment of new trees due to inappropriate agricultural practices and browsing. Remaining habitat is at risk of further losses through land clearing and senescence, and reduced productivity due to inappropriate agricultural practices, catastrophic fire, inappropriate fire regimes, invasive woody weeds, and the impacts of pathogens and pests of food trees. Further, the sub-species is at risk of climate change, nest predation and poaching.

The plan sets out a long-term, 50 year, objective for recovery of the sub-species, and two short-term, 5 year, objectives to meet the short term needs of the South-eastern Red-tailed Black-Cockatoo while attending to long term rehabilitation of essential habitats.

This five-year plan has two primary objectives to progress recovery. They are:

Objective 1. To achieve sufficient gains in the extent of feeding and nesting habitats to support the long-term recovery objective.
Objective 2. To effectively manage the most significant short term threats to recruitment of South-eastern Red-tailed Black-Cockatoos.

The Draft Recovery Plan attempts to identify all stakeholders that may play a role in the recovery of this iconic species. If you or your organisation believes you can contribute to this process we would love to hear from you.

All interested parties wishing to make comment can do so by emailing all feedback to Tim Burnard (timb@skymesh.com.au) by 17th August 2012. The draft is in a word document so that you can make comments directly on the document via track changes, or alternatively email Tim directly with your feedback.  To download a copy of the draft plan please click here.

Thank you for your interest and we look forward to receiving your comments and feedback.