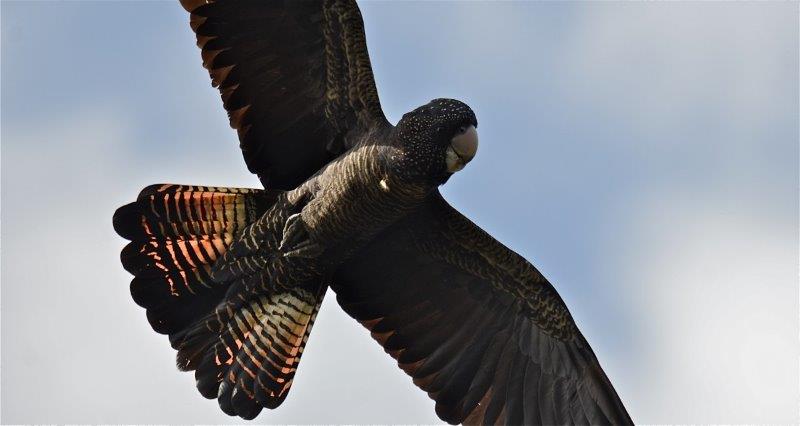 Photo credit: Mike Sverns
More than 150 volunteers helped celebrate 20 years of counting cockies as part of this year’s annual count for the endangered South-eastern Red-tailed Black-Cockatoo, which was held last month on Saturday 7 May.


Despite a record number of 52 sightings recorded on the day, the total number of cockatoos counted was considerably lower than last year’s total.

After taking into consideration double counts of cockatoos and three additional sightings of Red-tails recorded either side of count day the final tally stands at 901 birds, well down on last year’s record of 1545 birds.

Flocks were widely dispersed and considerably smaller this year, with only six large flocks of more than 80 birds recorded. Of these large flocks, three were determined to be double counts, and could not be included in the final tally.

The distribution and high occurrence of smaller flocks over a wide area may be partly to blame for the fewer Red-tails counted this year.

Red-tails are often very difficult to find, especially given their rarity and widespread distribution — spanning over 18,000km2 from Natimuk to Nelson in south-western Victoria and Mount Gambier to Keith in the South East of South Australia.

Although total numbers are down, it is unlikely that the population has suffered a rapid decline over the last 12 months; it’s more likely that birds were simply missed on the day.

The greatest concentrations of Red-tails (just over 60 per cent of all birds recorded) were found west of Casterton. It’s no surprise, then, that the biggest flocks recorded on the day — 334 birds drinking at a trough on the western boundary of Drajurk State Forest and 180 feeding near Cawker Creek — were found in this area.

The annual flock counts, which follow in the weeks after the count, have now revealed more than 700 birds currently feeding and residing in the Casterton area. Richard Hill and Tim Burnard were fortunate enough to count a staggering 501 birds come into drink at puddles in wheel ruts in Nangeela State Forest earlier this week.

Good numbers of Red-tails were also observed near Frances on the day, with follow-up surveys, thanks to Evan Roberts, revealing a total count of 136 birds for this area.

As always, information gained from the annual count is used to determine patterns of habitat use, a minimum number of birds and — most importantly — the location of large flocks. This information is essential for staff to carry out flock counts (counts of males vs barred birds - females and juveniles), which provide the best indication of breeding success.
Findings from this year’s flock counts will be available later in the month.

The annual count also helps to raise awareness of the needs of the cockatoo and offers volunteers a chance to become involved in recovery activities.

There was yet another wonderful turnout of volunteers to help on the day comprising locals, farmers who chose to survey their own stringybark patches, and interstate participants who travelled from as far away as Adelaide and Melbourne.

Volunteer effort was again outstanding, with 77 groups spending over 360 hours scouring more than 4,000 km of stringybark forest for the cockatoos across the range.

The annual Baileys Rocks Campout was again a big success with 24 people braving the wintery conditions to top off a big day of counting. Those attending were rewarded with a delicious cake thanks to Kerry Gilkes to celebrate 20 years of counting cockies.

BirdLife Australia and the Red-tail Recovery Team would like to sincerely thank all the wonderful volunteer observers involved on the day, including those that reported sightings in the lead up to the count. Without your incredible effort, this event would not be possible.

Also, thank you to those volunteers who offered to trial our first ever annual count smartphone app. The app sequence, developed to improve data handling and accuracy, received mixed reviews, but was found to be very useful for detailing the exact route taken on the day. The Recovery Team will be looking to take on board people’s feedback and suggested improvements in readiness for next year’s count.

Finally, a special thanks to Evan Roberts and Kerry Gilkes for their assistance with promoting the count and getting local landholders involved on the day and Tim Burnard for running the training session in Casterton and organising the campsite at Baileys Rocks.

A map of the count results can be viewed by clicking here.