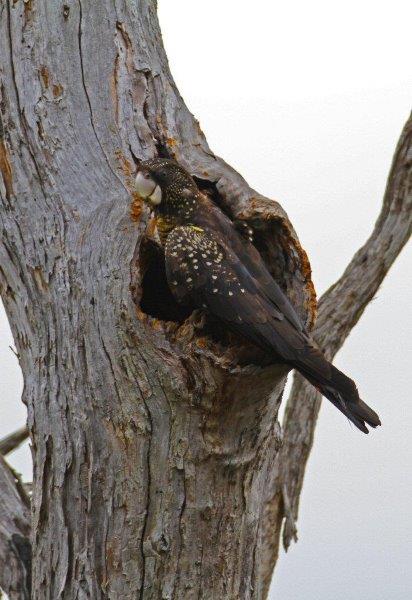 
Since 2011, incentive payments have been offered to landholders and members of the public for information on nest sites of the cockatoos across their range in the South East of SA and south-western Victoria.

Fourteen new nests have been discovered as part of the scheme, with the Team eager to locate more nests over the next few months.

Payments of up to $500 are being offered for information that leads to the identification of new nest sites and use of existing nests, thanks to funding provided by the Nature Foundation of South Australia.

Bronwyn Perryman, Project coordinator said, “We are interested to hear from anyone who knows of nesting Red-tails, and in particular, any nests to the west of the Riddoch Highway (that is, Lucindale and to the west of Penola/Naracoorte). Thus far, we have very few records of nests in this area.”

Red-tails require large hollows (15-50cm) for nesting, which naturally occur in very old, large eucalypts such as River Red Gums. Nests can be in dead or living trees and are more likely to occur in areas where there is stringybark within 3 kilometres. Although Red-tails have been found to nest year round, most breeding occurs over spring and summer.

“Knowing the location of nests enables us to protect nest trees from nest raiding predators such as Brush-tail Possums, which prey on eggs and young chicks,” said Bronwyn. “Information gained through the project also helps us to identify nesting hotspots, which assists us to better target habitat restoration works for this species.”

There are a number of conditions required when applying for the scheme, with incentive payments only made once the sighting has been confirmed by the Project Team.

Guidelines for the nest incentive scheme and information on Red-tail nesting behaviour can be found by clicking here.