Five functioning Red-tailed Black-Cockatoo nests have been found in winter whilst undertaking maintenance of artificial nest boxes north of Dergholm. 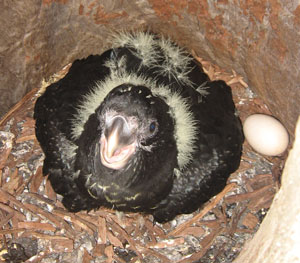 Tim Burnard, Dick Cooper and Dave Williams were surprised and fortunate enough to find an assortment of chicks, eggs and even a fledgling during routine nest box maintenance conducted in late June 2010. Red-tail nests were confirmed by watching the birds return to the nest sites at dusk. 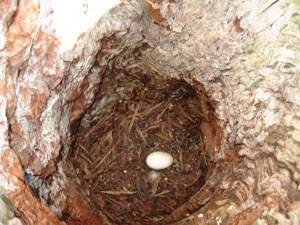 One pair was observed using a plastic nest box, which is very exciting given the low use of these in the past.

A sixth nest was also observed but couldn’t be confirmed as no adult Red-tails were observed leaving or returning to the nest during nest watches. Given that both a chick and an egg were found in this nest site it is more than likely that the nest belongs to a pair of Yellow-tailed Black-Cockatoos, as Red-tails only lay one egg. 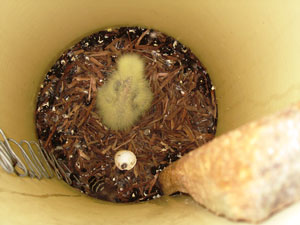 This is not the first time Red-tails have been found to breed out of season. Nests have been recorded in all seasons, but those started in January to autumn are likely to be re-nesting’s after failures. Red-tails usually pair and breed in spring, between September and December. One egg is laid and incubated for around 30 days. The chick remains in the nest for a further 70 – 100 days, and may continue to be fed by the parents for a further six months after the chick leaves the nest. 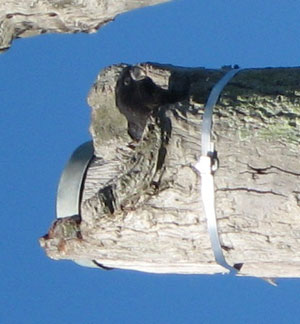 The relatively high number of artificial nests used in June makes us wonder how many natural hollows are currently occupied by nesting birds during winter, and why the birds may be choosing to nest during this time. This usual nesting behaviour may be the as a result of current climatic conditions and/or an abundance of their stringybark seed resource. The Recovery Team will be keeping a close eye on this over the upcoming months.
If you see signs of nesting activity by Red-tails from now on the Recovery Team would love to hear from you. Please contact Bronwyn on 1800 262 062 or email rtbc@birdsaustralia.com.au . 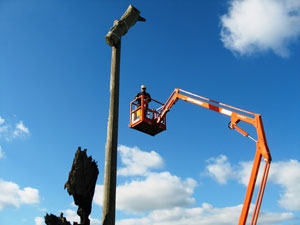